On May 28, the National People’s Congress of the People’s Republic of China adopted a draft decision that would allow the Chinese government to develop a legal system that would allow the introduction of a national security law into Hong Kong directly and the establishment of a security agency directly linked to the central government. If this content is realized, the “one country, two systems” and “high level of autonomy” that China promised internationally in the Sino-British Joint Declaration on the return of Hong Kong (1997) would be rendered powerless, and the freedoms and rights of the people of Hong Kong, including speech, assembly and association, in accordance with international human rights norms to which the Chinese government has agreed, would be suppressed, threatening the “civic space,” which is a social space for free speech, expression and activity in civil society.

Japan NGO Action Network for Civic Space (NANCiS) is deeply concerned by these decisions and urges the Chinese Government and the Government of the Hong Kong Special Administrative Region to withdraw their moves to introduce national security laws and establish security agencies in Hong Kong.

The severe crackdown on those working for the freedoms and rights continues in Hong Kong. Following the statement that NANCiS published last December, we call on the Government of the Hong Kong Special Administrative Region, Hong Kong Police and the Chinese government, as well as last December’s statement (*1), to

– The Government of the Hong Kong Special Administrative Region and Hong Kong Police should ensure the safety and security of “civic space” so that the people can make political statements and activities peacefully. Also, they should listen sincerely to the voices of concern in Hong Kong’s future, and strive to realize a peaceful and democratic dialogue with the people.

– The Chinese government should respect the democratic political system and culture that the people of Hong Kong have established, trust its ability to solve problems, and refrain from intervening in its autonomy.

NANCiS will continue to stand in solidarity with the people of Hong Kong and civil society around the world, and will keep a close watch on the situation in Hong Kong and take necessary actions and statements. 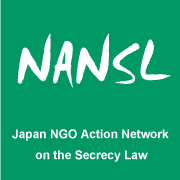